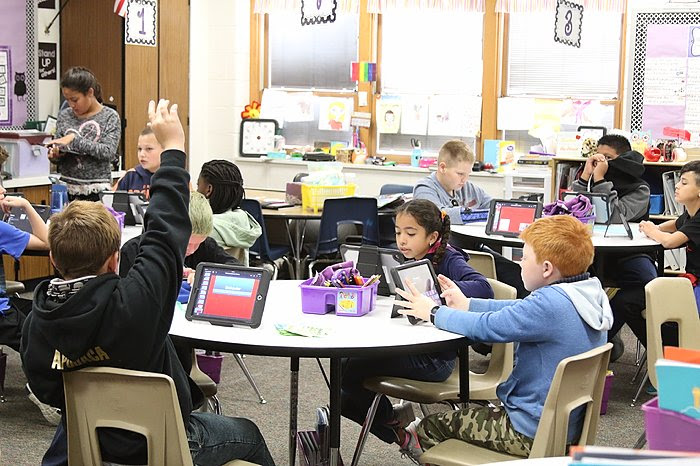 An architect has been selected for the $8.8 million bond renovation project scheduled to start in Summer 2018 at Northglenn High School.

Phase 1 of the expansion of STEM Lab in Northglenn took shape in October as the steel frame for the 25,000 square-foot east wing addition came together.

STEM students got to play a role in the work as students signed their names to an I-beam to be placed as part of the steel structure for the new elementary wing.

Work is literally happening at all levels of the new Thunder Vista P-8 in Broomfield as construction on the school passes the 5-month construction mark.

On a recent sunny October day at the construction site, ironworkers straddled steel beams at the top of the three-story building as dirt movers far below began the process to backfill the school’s massive foundation walls. Inside the school, framers and dry wall workers have helped the school’s rooms began to take shape while HVAC contractors have started uncoil the massive ductwork system that will snake, mostly unseen, throughout the building.

Bond-funded expansion projects at two Westminster elementary schools are in the final phases of the design process. Arapahoe Ridge Elementary is receiving a 12-classroom expansion and Cotton Creek Elementary is adding an eight-classroom wing.

The expansions will allow both schools to move students out of modular classrooms. Arapahoe Ridge will also add an Early Childhood Education program. The schools will also receive substantial improvements to the existing buildings.